An Atchi'tai (plural Atchi'taii, also known as a Tai or the Taii; scientific name Plumis Parvenen) is a member of a small, sapient Vindrite race resembling a bipedal, insectoid avian. A group of Atchi'taii is known as a tribe.

Atchi'taii stand at approximately five feet tall when standing erect, not counting their tail feathers or antennae. They have both scales and feathers, which can range in color anywhere from charcoal black to a dull gray-blue; these colors are very rarely bright (although the species is prone to albinism) except for the tips of the tail feathers, to warn of poison. Atchi'taii have long, feathery antennae that allow them to filter through the toxic mist of their home planet and use the poison as sustenance, making up for their inability to eat traditionally due to their lack of mouths. They also lack nostrils, instead using their antennae for this as well. Their eyes are large and situated on the sides of their heads, allowing an extremely large range of vision in order to escape large predators on Vindrgard. They have long, narrow ears that can turn in almost any direction.

Aside from a feathery mane that runs along the spine, an Atchi'tai's back, head, and the fronts of their limbs are entirely covered in large, hard scales that somewhat resemble an exoskeleton of sorts. These scales stop at the underside of the neck and chest (which are instead covered in downy feathers) and below the elbow and knee joints (which have hide rather than either feathers or scales). Two wing-like growths of feathers sprout from their shoulders- these are primarily for display, as the thin "arms" of the growths have a limited range of movement- and a very large feathered tail (almost the height of the individual itself) rises behind the Atchi'tai.

Both hands and feet are three-toed with large nails which are naturally blunt and dull, though almost as hard as bone. Additionally, their hind legs are digitigrade and sport a fourth toe at the ankle joint, which can be made to strike a large plate-like scale at the bottom of the foot to make a clacking noise. This seems to serve as communication beyond their inherent telepathy, as well as to intimidate predators.

The leader figures of an Atchi'tai tribe may also be seen wearing the skulls of Kiccaroq as masks, in addition to bright paint on both the skull and the Atchi'tai's scales to represent authority.

Due to not having mouths or noses, the Atchi'taii have no digestive system and a radically different respiratory system than other creatures. Their skulls are primarily taken up by their brains, including a specialized sensory lobe that connects to both the antennae and the inherent telepathy. As their chest cavities have no stomach or similar digestive organs, the space is occupied by two long, large lung-like sacs aligned on either side of the spine, as well as three hearts. Combined, these allow the Atchi'taii to sprint for a large amount of time and lessen the risk of a fatal injury.

Their bodies also contain a special organ that converts toxic air filtered by the antennae into a liquid, oily poison secreted at the base of the feathers. This poison is a weak hemotoxin that can, in large doses, completely solidify the blood of the victim and is developed in order to stave off predators.

Atchi'taii do not require the toxins in Vindrgard's atmosphere in order to breathe, only to derive sustenance. If one were to be carried off-world, for example, it would starve rather than suffocate.

Atchi'taii are telepathic, and have the ability to broadcast their mental "voices" to whoever they wish within a certain range, and also have a natural ability to "tune out" or block any incoming telepathy, whether it be another Atchi'tai or not.

The constant filtering of toxins from the environment also allows the Atchi'taii to secrete a foul-tasting venom from the base of their feathers, in order to discourage persistent predators. It is not fatal except in large doses, but does usually result in the predator growing ill after eating an Atchi'tai.

Atchi'taii are intelligent creatures that gather in tribal communities led by a single patriarchal individual and his two closest companions, in a group collectively known as a Sarriq. The Sarriq organizes the tribe and ensures that it stays out of danger, as their primary predators (namely the Kiccaroq and the Ulfric) can either avoid the toxic mist entirely or are resistant to it. When a tribe attempts to escape a predator, the individuals first flare out their tails and make noise with their dewclaws; if this does not intimidate the predator into running away, the tribe flees at speeds of up to 50 MPH.

The tribe is extremely community-centric, and the Sarriq enforces harsh punishments for transgressions. Theft from a tribe-mate is considered a serious offense and can lead to physical injury as well as a collective shunning by blocking the offender's telepathy. A more grave offense is to harm or cause injury to a tribe-mate without the Sarriq's approval; this very quickly leads to the offender's antennae being torn off, resulting in rapid death by suffocation. Other offenses are usually much more minor; the individual generally only has to redeem itself in some way ordained by the Sarriq.

The leader of the tribe can be challenged at any time, unless the challenger is in the process of redeeming itself or is being shunned. The leader and challenger begin with the typical standoff that, for example, a wolf pack might see; this involves using the same tactics employed to scare away predators. After this display, however, the leader removes its skull helmet and the two combatants engage in headbutting each other. This can result in injury, concussions, or even a torn antenna, but is very rarely fatal. The first combatant to lose its footing- by either falling or being knocked over- is the loser and is immediately driven out of the tribe. The victor either becomes or remains the leader of the tribe. 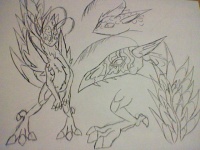