Helena Knezovic-Scarletburn (née Helena Knezovic , unofficially Helena Errin in the Grenian Identity Archives, and proper Croitian: Helena Airiesaire) is a primary protagonist of The Grenian Conspiracy and an ex-mercenary for the joint Causican-Grenian subjugation 35 years prior to Standard Canon Time. Joining Arias' group "The Flock" as their deadly mistress of arms, Helena spent her prime years as a rebel with the intentions of liberating Causica from Grenian grips all while discovering herself and opening up. Even after her work was done, she remained loyal to her group members and eventually married their leader, her husband Arias Errin. 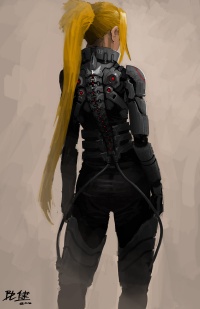 Helena has almost penetrating red eyes with flowing dirty blonde hair, which she keeps in a ponytail behind her head. She has unblemished white skin with the perfect tinge of tan coloring to give her a golden glow. She stands at 5'9" with a lean and agile figure which fits snugly into her skin-tight outfit. Despite her beautiful appearance, her armor says tactical fatality. She wears a black skin-tight jumpsuit with hundreds of pieces of perfectly-fit, flexible, and highly-dense black metallic armor only separated by distinct lines of glowing red neon. The densest portions of the suit are rested upon her shoulders, chest, neck with a slight retractable brace around the back to prevent injury to her neck, forearms, legs, and upper back. There are also two small red orbs on her shoulder blades, which seem to be the power source for the suit's working ability. Not only does it have high shock absorption and shrapnel blocking, the suit has a built-in cloaking mechanism, bending the light around the wearer to give the illusion of non-existence. The only distinct flaw is if one can focus enough on Helena to see the suit's refracted outline. It also has a faint damage deflection protocol, sending out small bursts of its power source to dramatically decrease incoming attacks of high velocity.

Strong and stoic, Helena has not a care about outside influences judging her actions or way of being. On the surface she seems callous and cold, seeming to only care about her job and her position. Helena is extremely driven and goal-oriented, basing her self-worth on her performance. She really takes failures to heart, and does not accept achieving anything less than superiority in certain fields in which she excels. She is also highly prone to envious tendencies, especially towards higher-ranking people whom do not earn her approval or respect. This sort of tendency is shown with Peace Walker Fox during Worlds Under One, and in her early encounters with Arias in which Arias tries to do her job, and proclaims himself to be the leader of The Flock. Although she can be seen as a negative person, Helena does have a hidden passion and grace in herself. To those she sees as worthy, she is loyal to the very end. She provides great concern and even emotional support in order to see them achieve their highest potential, no matter how brusque she initially comes off. However, those traits are often shrouded by her emotional restrictions since she would rather not express her deepest feelings. Helena would almost rather keep her feelings to herself and not involve herself with too many people, though that temporarily changes years after Worlds Under One.

With the people she shares the deepest connections with, she is cautious with her feelings but willing to show them. With Arias, she trusts him with her deepest desires and highly adores him. Therefore with any setbacks she has, she almost always brings it up with him. A loving, loyal, and calm and wise self of hers emerges when she is with family, as family is her most treasured possession. In spite of this, she is rather tough with those she loves.