In the Alter Timeline, Kyton joins forces with the Cult of Ustream during the events of the titular canon's first season. He claimed to be a renegade soldier that was seeking asylum in the wake of his defection from the Durasken military. 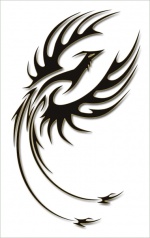 Kyton is of a rather willowy build. He is quite lean in terms of muscle mass, with an athletic build due to years of his military training. He is not particularly bulky, but is not malnourished either. He has a head of iridescent green hair and vibrant, piercing yellow eyes. While Euthorans are generally relatively pale, it is clear that Kyton has spent his fair share of time out in the sun as he sports a comparatively rich tan. A tribal phoenix tattoo is branded into his left arm, with the serial SHF-4-1549-7623 along it, marking him as a (former) soldier in Durasken's military. The tattoo extends from the back of his left shoulder, its tail wrapping around his arm to end at the wrist.

His clothing, while bloodstained when he first arrived at Cult of Ustream Headquarters, is now as clean as those of any other member, if a bit ragged and worn. His preferred outfit is quite laid-back; unusually casual considering his military history. He prefers neutral colors, such as a white or gray tee-shirt, and wears denim bottoms. A sheath rests at his waist, housing a splendid silver-bladed sword much like a straight katana. The sword's metal gleams almost with a bluish tint.

Unlike most Shapeshifters native to Durasken, Kyton is amicable, sociable, and charming. He is oddly charismatic and diplomatic for a Shapeshifter, and is notably much less hostile than most others of his kind. Rather than engaging in direct conflict when confronted, Kyton displays a strong ability to defuse tense situations through discussion and peaceful resolution. He is generally polite and positive, and shows genuine interest in what others have to say.

Occasionally, Kyton will come across as abrasive or arrogant, but generally maintains a pleasurable demeanor. Kyton is also a very good listener, actively asking questions to his equals. As a member of the Cult of Ustream, he treats his fellow members with respect, regardless of whether they are human, a member of his own species, or an off-world alien. He initially showed a degree of wariness, or even fear when interacting with the dragons of the Cult of Ustream, but has since gotten over his fears. This could have been attributed to his experiences in Durasken, due to lingering racial tensions.

Kyton has not outwardly displayed any notable Soul Phantasms so far.

In combat, Kyton prefers swordplay over utilizing his natural abilities as a Shapeshifter, but he is willing to shift into his other forms if their usage becomes practical. His preferred style of swordsmanship is at once aggressive, but evasive. Fitting to his nature as a Shapeshifter, he leans towards circling tactics in order to stay out of the immediate range of his opponent. Kyton has a tendency to be opportunistic, if not downright vicious when he spots an opening in an opponent's defenses. For example, during a practice spar with Espira Xirro, Kyton momentarily forgot that the match was just for practice and swiped his sword at Espira's arm with the intention of crippling it.

His skill in his various forms is currently unknown, as he has not fought enough in them to be certain. What is known is that his vine snake form is poisonous, and his Bat-Winged Lupynn form grants him that species' ability to project his howling to a sonic intensity -- an ability that, while typically used as a communicative function, has the capacity to be weaponized. An example of Kyton utilizing his skills as a Shapeshifter is when Slash pinned him against a wall during a Cult of Ustream raid on the Station of Seotara's headquarters led by Lord X-Giga-X. Kyton attempted to respond by shifting his legs into wicked claws in order to rake down Slash's abdomen. Although the attack ultimately failed, it is clear that Kyton is reactionary and quite resourceful in the heat of the moment.

He has a sufficient grasp of magic to augment his fighting, utilizing it for such purposes as making his strikes stronger or faster, or improving his perception in the heat of combat. During the aforementioned spar with Espira, he used magic to protect his sword until he was certain that she would not destroy the blade.

Kyton has been making clear efforts to be friendly with all members of the Cult. He seemed afraid of the resident dragons when first integrating himself into the Cult of Ustream, however he has gradually become more comfortable around them. He seems to be directing the majority of his "friendly efforts" towards specific members of the Cult.

Kyton seems to come off as coy and condescending when interacting with the Station of Seotara. It would appear that, on the surface, this is as a result of nationalist tensions between Durasken and Seotara. Having stuck around the Station's headquarters after a Cult raid to gather intelligence, Kyton was caught by Slash (who caught his scent while Kyton tried to make his escape) and was subjected to questioning. At this time, after being questioned by the Station, Kyton responded that he was a renegade soldier seeking asylum with the Cult of Ustream. Unlike the Cult, however, the Station was much less eager to trust his word.

Kyton's history is unknown. All that has been revealed is that he was a soldier in Durasken's military, but reneged due to his treatment and ended up finding the Cult of Ustream Headquarters seemingly by accident.