Shiveztel (proper Drakine name Shiveztel Shaiveér, translated Change heals and comforts those near the void's edge; full given name Shikaveztavel) is an adolescent (at SCT) Darkwing Firedrake and the son of Vol en-ait Rae and Mordicai. While otherwise Fire-Aligned due to species, his inherent ties with his mother give him a Dark Alignment.

Though considered a pureblooded Darkwing Firedrake by physical genetics, because of his mother, Shiveztel has a divine soul and is thus, in reality, a demigod.

Shiveztel with a wing spread to near full length.

Shiveztel is built typically for a young Darkwing Firedrake- more slender than an aged adult, but with noticeable bulk at the shoulders and hind legs. At SCT he measures slightly over 25 feet long with a massive and broad 60-foot wingspan. His heavily muscled shoulders lend to powerful wing muscles; while he is not as fast as other, lighter Firedrakes in the air, he can typically stay airborne longer and fly more easily through harsh weather. Shiveztel has an elongated, slightly low-slung build, allowing for a good measure of stealth at night on uneven terrain. Most of his body length is his tail, which is held as a counterweight to keep him balanced when moving silently.

Covered in metallic black scales, Shiveztel has several silver markings, most notable on the outer edges of his wings. These wing markings are jagged and help break up his outline under moonlight. He has an arrow-like marking around his left eye; his eyes are a sharp emerald green, faintly luminous, and contain vertical, sightly rounded pupils. The ventral sides of his wings are a solid silver, matching the leathery scutes on his neck and abdomen, as well as the silver dorsal membrane that runs all the way from the base of his skull to halfway down his tail. This membrane is light, reflective, and the center of Shiveztel's body language, its movements noticeable at the slightest twitch according to Shiveztel's emotions.

Shiveztel has an eight-point crown (three points on each eye ridge and two on the central crest) and four gently curving, tusk-like horns which frame his skull nicely. Like all Firedrakes, he has a hooked snout and spiked nostrils, tetradactylous limbs, and two leathery rings around his tail. Additionally, he has a barbed spike at the end of his tail, used primarily for clubbing, though the four back-facing tips of the spike are sharp, serrated, and capable of dealing heavy shredding damage. 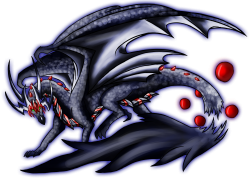 Shiveztel is typically aloof and distant, preferring to be alone even when around friends or family, and is notably aggressive due to species.He deals with stress poorly, becoming jumpy, high-strung, and highly reactionary to pressure. This leads to dangerous impulsivity and recklessness, particularly during combat, where he can become so aggressive as to lose his rationality.

Shiveztel has a notable "free or dead" mentality and would much rather be killed than be captured or enslaved. To this end, he holds a heavy distrust towards dracoimperists despite being one himself. He does not use his own dracoimpery on unwilling dragons, even in self-defense, and instead fights his way out of conflict with other members of his race.

Despite his aggression, recklessness, and slowness to trust, Shiveztel is a very clever dragon with a good eye for defensible, strategic perches. Due to being nocturnal and black in color, he is a skilled ambush predator, choosing to stalk prey from rocky and uneven high ground before circling in front of his prey and striking when it gets close.