Ceskion (also known as Litaria) is a planet in the Manaverse. It shares the Corian Star System with Euthora and Ferona. By Standard Canon Time, the planet is shared by two dominant races: the reptilian, carnivorous Sarkiri, and the more primitive, mammalian Kovulzel.

At some point in the planet's history, it was dominated by the avian race known as Litarians. The Litarians were highly advanced, but were cursed by one of the planet's deities, Cozion. 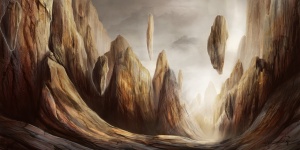 A canyon, where boulders levitate with electromagnetism.

Ceskion is located fairly close to its sun, which renders it as a fairly arid planet. It receives lots of sunlight, and is overall very hot in terms of climate. Ceskion features little water, although there are many dense jungles and vast desert areas across the planet's surface. It is also quite mountainous with several craggy areas. In several locations on the planet, there exist lava plains that [...].

In some places, there exist canyons with boulders and chunks of stone that float via electromagnetism.

In Ceskian ecosystems, sound is of vital importance as most creatures respond better to sonar stimuli than stimuli to the other senses. The majority of Ceskian plants attract pollinators through sound, rather than color or scent. This leads to Ceskian flora on a whole being much more "muted" in terms of color. Some vined plants may wrap around and attach themselves to animals in order to move from nutrient-poor soil. From there, the vines will use dirt, insects, dead skin caught in the animal's fur, or even pierce the still-living animal for its blood in order to obtain nutrients.

The Sarkiri are a race of bipedal, digitigrade reptiles with hooked talons. Their splayed talons allow them to stride on loose sand without sinking in. In general, Sarkiri have brightly-colored feathers on their skulls and backs, with males having brighter plumage than females. Along with their feathers, Sarkiri also have spikes that line their heads and spines. They have long horns made of bone, with long, blunt snouts. Sarkiri are obligate carnivores and cannot create the proteins necessary for survival from the raw materials like herbivores can; thus, they eat creatures which have already done it for them. Sarkiri speak in smooth, and slightly sibilant or raspy voices.

Sarkiri have tetrachromatic eyes, and are able to see into the ultraviolet section of the color spectrum. They will commonly tattoo their faces with vibrant warpaint, which also reflects ultraviolet light. Their warpaint appears more vibrant to them than to other creatures, as the Sarkiri can see a wider range of color. The Sarkiri predominantly hunt at night, which means that their warpaint functions to signal the presence of one Sarkiri to another while hunting. This way, they can still remain hidden to their prey. They are predators to the other major Ceskian race, the Kovulzel. Sarkiri are nocturnal, and their reflective warpaint also absorbs and retains the heat from ultraviolet rays. They spend most of the day sleeping or basking in the hot desert sunlight, storing heat to keep these reptiles warm when the temperature plummets at night.

Stealth and silence are culturally prized by the Sarkiri, and they tend to keep strong familial and platonic relationships. It is rare to see a Sarkiri traveling alone, as they prefer to travel in pairs or with family units. As they are a nomadic race, the traveling Sarkiri family units will eventually coalesce into a single community, forming tribes out of several atomic units. It is common for Sarkiri to "trade" individuals in order to bring new blood into groups, or otherwise join entirely together. Their nomadic tendencies eventually leads to them taking an interest in spacefaring technology, enabling them to travel to other planets such as Ferona.

When traveling, the Sarkiri are able to run at a good speed across flat terrain or the desert. By using their tails to balance, they are able to briefly drop to all fours in order to run more quickly, but in general the Sarkiri prefer a bipedal stance.

The Kovulzel are a mammalian, humanoid race that resemble [...]. They generally have light-colored pelts with dark spotted markings. They have long, furred tails with ringed patterns, and retractable claws. The average Kovulzel has large ears and large eyes which reflect light. The Kovulzel have a vocal cord structure that enables higher-pitched, animal-like cries which they use to call their mounts. This cry is also used to deceive prey or to scare off a predator when hunting.

Kovulzel are omnivorous or mesocarnivorous, and generally prefer fruit. They are a relatively primitive race when compared to the Sarkiri. The Kovulzel focus heavily on gathering, and feature only the most rudimentary of tools. In general, they have also developed a robust system of farming, and often tend to their own crops.

The Kovulzel are generally perceived to be quite innately talented when using Magic.

The Litarians (scientific name Plumirapax Sapiens) were a Ceskian race that existed long before the Sarkiri and the Kovulzel. They were an advanced, space-capable race that often visited Ceskion's neighbors, Euthora and Ferona, artificially advancing the societies there under the "understanding" that they were helping the affected races. The Litarians believed that intelligence fostered peace, and so making other races more intelligent would make them more peaceful.

The Litarian society vanished suddenly after being cursed to eternal savagery by Cozion, for the hypocrisy they displayed in their justice system and the gradual corruption of their leadership.

The Ribbon Serpents are gigantic, sentient constructs of red and gold silk that were magiologically enchanted to listlessly drift throughout the Ceskian deserts. The ribbon serpents come in various sizes, ranging anywhere from human-sized to colossal lengths. Although they appear harmless, these constructs will attack with magic in the event that something approaches too close to it. Their size is relative to their strength and threat level; the human-sized serpents are mostly harmless, whereas the largest of the serpents are extremely dangerous. It is believed that the ribbon serpents are remnants of a bygone era on the planet, and were once the guardians of an older civilization. This is not too far from the truth, as the ribbon serpents were once known as Wardens, and were created by the Litarians.

Both of the dominant races on the planet ride large, lean, quadrupedal reptiles known as Sandstriders as mounts. These reptiles are lean, hardy creatures who are quick and agile. They are best suited for traversing rocky or mountainous areas, but their lean frame and agility make them fit for traveling through the dense jungle areas of Ceskion as well. In the case of both the Sarkiri and the Kovulzel, Sandstriders were either naturally domesticated or specifically bred with the intention of them being used as a mount. In nature, they are generally predators.

Ceskian Tarnished Drakes are a draconic species of malomorph. They are low-slung to the point where they are almost serpentine in terms of movement. They are known for their very long bodies, but are relatively short (comparable to a Terran tiger in terms of height).

With the Litarians out of the way, culturally the Sarkiri are so dominant to the Kovulzel that the latter barely matters overall.

Sarkiri hunt and kill Kovulzel for food, but also keep them as slaves

The Sarkiri are highly advanced compared to Ceskion's neighbor Euthora, though do not quite reach Ferona's level of technology. They create devices and other technologies fueled by both Mana and electricity. The Kovulzel, in comparison, are woefully primitive, usually able only to create rudimentary tools and basic weapons out of stones and sticks. The Sarkiri use their technological advantage to not only hunt the Kovulzel for food, but also to capture and keep them as slaves, using special harnesses or collars linked to a remote and often wristband-based control device in order to keep the Kovulzel in line.

The most common model for these collars and harnesses involve thin needles attached to vials set in the neckpiece. These needles are constantly piercing the neck of the wearer, not causing obvious damage should the collar remain undisturbed. The collars are not meant to be removed, and thus have a mechanism which fires upon the unlocking of the collar (unless disabled by the control device) and automatically release the contents of the vials, which typically ranges from anesthetics to poisons to drugs that prevent the wearer from thinking clearly until the Sarkiri can recapture their slave. Kovulzel slaves typically wear these collars their entire lives, with the vials being refilled with the collar still worn. Due to the tightness of the harness, as well as the needles, it is easy to tell by marks and scars on the neck when a Kovulzel is normally collared.

The Kovulzel have an intricate pantheon with both greater and lesser deities. These gods represent broad, overarching concepts as well as the aspects of the tight family units the Kovulzel create.

The Sarkiri believe in primal, wild deities that are referred to as Aspects, rather than gods. The Aspects are representative of traits of the Sarkiri's tribal, nomadic, and predatory society. The belief in the Aspects may vary from tribe to tribe, as the spread of information pertaining to them comes organically through intertribal contact. Dyovyhr is the only truly universal Aspect, inasmuch as he is the most important to all of Sarkiri kind.