Pricilla Starkey (often referred to by her nickname, Starr; real name Sutaroki Kormiir) is a Royale Serpent-Psydrake hybrid, and is a princess belonging to the Mantuanese royal family. She is a brilliant bioengineer (specializing in genetic research and modification), doctor, inventor, and is also a practitioner of Garnere's theories.

Pricilla is regarded as a highly-intelligent individual who is a valuable asset to the Cult of Ustream, as well as other factions in various Manaverse timelines. Though she began as a simple and often spoiled little princess on her home planet of Mantua, she was taken away at the age of four by her adoptive brother, Ivan Karros, beginning her life as a scientist under his wing on the planet Terra. She later would escape to Euthora in the Alter Timeline, leading to her participation in the Cult of Ustream canon.

Her role in the Prime Timeline within the Dissonant Rhapsody canon is still unknown.

Starr stands at around 5'9" and weighs approximately 140 pounds. Much like her mother, Starr has light brown-colored hair, brown eyes, and a lighter complexion when she is in her human form. This is considered to be unusual by Mantuanese standards. She typically can be found in semi-formal attire, such as a one-piece dress suit with thick, dark brown padding on her shoulders. The dress remains slightly open around her chest area, and Starr wears a belt that falls right above the end of the dress. Alongside this, she occasionally wears dark brown gloves with matching long socks, the latter of which remain under tan high top boots that are made with an elevated heel on the back.

Although Starr has a tendency to remain in her human form, her original birth form is that of a Royale Serpent. In this form, she reaches a length of over 84 feet, and is adorned by white scales with golden back plates. As is a defining feature for Royale Serpents, her tail slightly resembles that of a butterfly, and is of a typical red coloring. 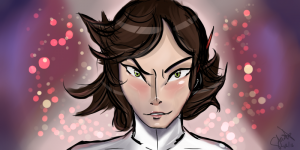 In Prime timeline, Starr's appearance is drastically different to reflect how confident she is. Instead of long tied hair, her hair is much shorter reaching past her jaw. Although she differs from her Alter counterpart, it seems like the two of them share the aesthetic habit of brushing one or both sides of their hair to the side as a bang. Starr is also lighter skinned.

Typically she can be seen wearing a white Genko Taka combat suit with supported padding on her ribs and stomach area. Her forearms are covered in white metal pads overlapping each other. Starr wears a retro Mantuanese codec headset on her left ear, though it is the only piece of her clothing that is black and red, not white.

When using her ability "Iris Quadrophenia", a colored ring forms in her irises. Depending on the setting she places, the lit iris is either found on the left eye, right eye, or both. (Overlap, Share, and Peer settings respectively).

In times of peace, Starr outwardly shows concern over people and genuine care for everyone's well-being. She remains confident, overactive, outgoing, and positive; even when lacking any reason to appear as such. She is passionate and dedicated. When her daily routine is disturbed, she tends to become angry or irritable, often ending in Starr being slightly hostile towards that which gets into her way. When situations begin to get rough, the softer side of Starr emerges. This manifests itself as depression, or cowardice to confront emotionally-sensitive issues. In this sense, Starr tends to keep away from tough, emotional situations as much as possible. This could be as a result of having been emotionally restrained by Ivan while she was growing up. A notable example of her reluctance to confront issues that have a degree of emotional sensitivity is when she remained unable to admit to CrazE that she had feelings for him that were as strong as his for her. Another such example is when her mother was killed - at this time, Starr would completely shut down.

Starr is typically not a person that actively carries around any weaponry. However, she is known to carry small amounts of medical supplies with her whenever possible, in order to minimize casualties or injuries that she or her allies may sustain. Her typical equipment is made up of a variety of syringes, restraints, and poisons in the event that something goes awry. Apart from that, she does not carry anything of note on her person.

Although typically not a fighter, Starr's specialties in combat focus on close-quarters combat within her human form. She utilizes precise and speedy strikes in order to swiftly disable and disarm her target. Her style, therefore, could be considered to revolve around such maneuvers to disable her opponent, and then use their own force against them. That way, instead of utilizing her own energy, she is able to take any threat out using their own power, and minimizing her own expenditure. When in her Royale Serpent form, she tends to adopt a much more long-ranged, 'siege' style of combat, to keep her enemies at bay, wearing them out before closing in for the kill.

Prior to Cult of Ustream

After Starr joined the Cult of Ustream, she began to engage in much healthier relationships. As a medic, Starr shows care for almost each of the Cult's members equally, but does also hold some of its members in higher regard than others. These are the ones with whom she feels able to relate the best.