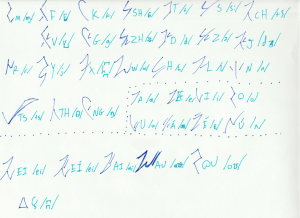 Drakine (natively Drákirou /drækiroʊ/, Dragon Voice) is a language spoken as the native tongue of all Euthoran dragons and is a descendant of early Acaranian. While it can be taught to and understood by humans and other beings, its harsh sounds are suited to a dragon's capabilities. As such, some words are often unpronounceable by non-dragons. Archaic Drakine is the earliest form of Drakine, no longer in use, and is far more similar to Acaranian than modern Drakine is.

Native speakers of Drakine (primarily dragons) have a noticeable, sibilant and growling accent and may be difficult to understand in languages they are not used to speaking. Due to the rarity of contractions in the language, the lack of difference between object and subject pronouns, and the fact that minor words such as "of" are often optional, it is common for dragons speaking in other languages (particularly Common) to have strange or broken grammar. This also leads to dragons taking a somewhat formal tone.

Drakine consists of twenty-five consonants, eight vowels and five diphthongs. The language is characterized by heavy use of vowels and sibilants in many words and the dragons' "hissing" accent (due to the structure of a dragon's mouth). Its vocabulary works with a "root" system: designated "base words" or "roots" when combined give rise to words with other meanings.

The earliest known form of Drakine can be placed in the era following the birth of Skyking Shyr's offspring. As Shyr himself was raised speaking early Acaranian, he passed on the tongue to his descendants. Naturally, the language accumulated variations and corruptions as it was spread and passed down generation to generation. At some point during the mid-Radiant Era, Skyking Ausurath, Skyqueen Sahiri, and a handful of scholarly humans developed and finalised a written form of Drakine. This formalized the spellings of most words; previously, humans worte in Drakine using the Acaranian script, which was difficult—sounds present in Drakine were absent in Acaranian, and vice-versa.

Drakine's vocabulary works with a "root phoneme" system, in which sounds are assigned connotations and merged together to create words. In most cases the roots themselves are not words, though there are exceptions.