Lupynn are strongly canine in appearance, despite that particular genus not being native to Euthora. They appear to be large Euthoran wolves with eagle-- or bat-like-- wings, however there are core differences in the shape of the snout and paws. Lupynn have sharp, lean snouts and retractable claws, as well as an effectively-insulating mesh of fur and feathers (aside from the Bat-Winged Lupynn). Despite the species' lean frame, the Lupynn is quite a large animal, reaching up to fourteen feet in length, approximately half of which is its flowing, vulpine tail. It stands at about five feet to the shoulder, and eight feet to the ear tip when its head and ears are fully erect. Each wing is about ten feet long, with the space between the shoulders making the wingspan a full twenty-two feet in length. Despite its large size, most Lupynn weigh just under 145 lbs. This is believed to be so in order for them to fly. Most adult Lupynn carry a faint aura of their predominant fur color.

Despite its large size and perhaps because of its weight, the Lupynn is one of the fastest apex predators on Euthora, rivaling the Voidwalker for top speed on land and some species of Lesser Wyvern in the air. Reaching speeds of 180 MPH in level flight, 220 MPH in a dive, and 165 MPH in a sprint on land, prey animals are usually forced to take cover among trees, leading to the Lupynn's typical territory. The Lupynn has an average lifespan of about 200 years.

As mentioned above, Lupynn have a strong affinity for magic and spirits, giving them their signature aura. This also causes deceased Lupynn to frequently manifest as spectral beings to continue roaming Euthora. In this state, they tend to be silent observers, staying at the fringes of their old territories and may even come closer to human settlements than when they were alive- lending again to the humans' cultural worship of the species- a few selecting them as totem animals and spirit guides. Aside from this, however, Lupynn are very strongly wind-aligned, having been created by Taelos herself. This grants them inherent Aeroimpery, though this is usually untrained after the Lupynn is able to adjust wind currents to aid in hunting. Spirits rarely display this ability.

Bat-Winged Lupynn have the ability to increase the volume of their howls to a sonic pitch, which can be used to stun or disorient enemies, but in reality was evolved as a way for packmates to communicate with each other when in the mountains.

Lupynn are highly intelligent, reclusive animals, never forming packs, not mating for life, and indeed only staying with their mate for a short time- until the pups are old enough to travel with their mother. The father only rarely takes care of the pups after this point, but in the time between mating and departure, Lupynn are very much like wolves- both parents doting on the offspring. Pups depart to live on their own as soon as they are able to fly at two years old. The species appears to have an instinctual aversion to humans, keeping a respectful distance from cities. In some cultures, this distant nature and the species' unique abilities and intelligence make the animal worshiped as guides and guardians. This is also helped by the occasional fight between a Lupynn and a dragon over food, which may be seen by humans as the Lupynn preventing the dragon from attacking cities.

Lupynn are notoriously solitary creatures, and do not share territory with others of their kind. The only exceptions to this are briefly mated pairs and mothers with pups. They tend to live in low-lying hills, open grassland, and sparse forest. Oddly, they are only found on the continents of Acaran and Farixya, appearing very rarely on Ethanol, and not appearing at all on the Euthorica Islands or Forvolrasuls. They are rarely found within ten miles of large human habitations and have a vague rivalry with dragons, though only via competition for food.

As the Divine Spirit Kohal en Taelos frequently takes the form of a pale green and silver Lupynn, it is said in legend- and confirmed by those few who have spoken with her- that the species was created by the wind spirit herself. This raises questions about its relationship with the Euthoran wolf, which is instead an Earth-Aligned animal without wings. Due to its slightly more muscular build and pack tendency, it is believed that the wolf evolved as a split from early instances of the Lupynn. The latter, in the meantime, has evolved intelligence to the point of sapience and advanced vocal chords to the point of intelligible speech, including Common, Latin, and rarely Drakine. They have also evolved a higher affinity for magic and spirits, giving them their signature auras.

Fera Tempest Chiroptera, or the Bat-Winged Lupynn, is a smaller subspecies of the Lupynn. Aside from its size- roughly 75% that of a normal Lupynn- the core difference lies in its wings. These wings are, as the name suggests, leathery and batlike. The Bat-Winged Lupynn entirely lacks feathers and has a leaner head, and tends to gather in small packs, unlike its larger cousin. While still sapient, they are noticeably less so, and tend to live in mountains. 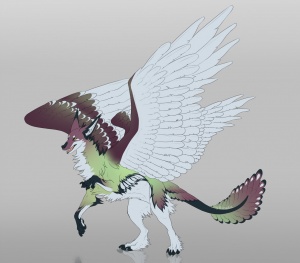 The Lupynn- more specifically the Royal Lupynn- is the official heraldic symbol of Ferinael, representing the powerful mages that lead society. This country also celebrates the Lupynn as a guardian spirit.

Lupynn feathers are believed to be a powerful symbol of good luck, perhaps the most powerful on Euthora.