Tobias Shaver (referred to by close friends and family as Toby) is a Shapeshifter and human-Darkwing Firedrake hybrid. He is the son of Jason Shaver and Niraya Aliira in the Prime Timeline, and the hypothetical son of Jason and Destiny in the Alter Timeline. A supporting character in Euthoran Song's plot Untamed Beast, he later goes rogue and becomes an antagonist in the minor plot The Tolling Bell. As a dracoimperist, his Familiar is the Phasma known as Raiereí.

Because he is a hybrid of several different species, his elemental Alignment defaults to Water because he is a Shapeshifter. He does not inherit Jason's Dark Alignment. 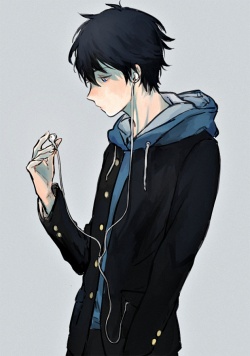 Like Jason, Tobias favors his human and wolf forms and has access to his Feral State, but does not use his dragon form as much. He inherits Jason's black primary color, but his secondary and tertiary colors are white and crimson respectively. Instead of his father's piercing green, Tobias's eyes are a cold blue, and turn red in his Feral State.

Tobias heavily resembles his father in this form. They share the same dark hair, sharp eyes, slightly above average height, and pale complexion. However, Tobias is considerably leaner- almost scrawny- in all forms, most noticeably in his human form.

Tobias appears as an overall normal black wolf, though slightly smaller and with longer legs and shorter fur. He bears distinct white markings on his head and tail.

Similar to Jason, Tobias's Feral State carries both his secondary and tertiary colors, creating white and red markings along his body which bring out the glow of his red eyes. In contrast to Jason's vein-like markings in his Feral State, Tobias's pattern is more akin to a network of circuits.