Raiden Version 23 (later known by the name of Raiden Takáshouha) is a Diclonius, and one of the survivors of the collapse of the GARNET Research Facility's DEICLONOS project on Phantasia.

In the Prime Timeline, he assumes an important role in Kirenyun's Imprinted as a member of the Zhennka Shi Unit after having been transported to Mantua, where he settles for the remainder of his life. 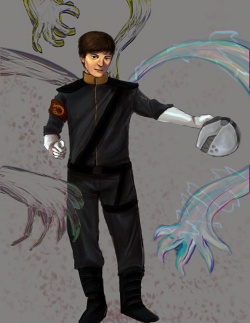 Raiden's Uniform
Raiden stands at a height of 6'2" and weighs approximately 140 pounds. Throughout Kirenyun's Imprinted, his attire consists of a thick, dark gray jacket with an elevated gold collar, black shoulder pads, and white arm-length gloves. To accompany the Mantuanese human uniform he is initially outfitted with, he wears dark gray pants and black boots, along with a crimson armband that bears Mantua's insignia - the Sky Serpent.

When dispatched to missions of high classification, his attire is replaced with a black sneaking suit that is mostly heat resistant and provides extra support for strength and endurance. Its special fabric, nicknamed Genko-Taká (soul fabric), harmonizes with one's Soul Component to impose an enhancement of an individual's physiological tolerance and strength. Various belts wrapped around his waist and inner thighs provide Raiden the space to store ammunition and weaponry.

At first glance, Raiden seems to be a genuine blunt brute that does not hesitate in pointing out something that may conflict with his interest and ideals. Generally respectful, intelligent, and at times sarcastic, it may look as though he does not have any knowledge of fun. He doesn’t. However, his willingness to attempt new things and an overall iron-willed attitude towards situations seem to allow him to adapt to anything quite well. However, Raiden does have some problems regarding his social skills at times, causing him to sometimes miss social gestures and cues.

Despite being new to Mantua, he seems to portray a sense of security in his surroundings which manifests in him being headstrong, confident, and assertive to what he wants or does. He is a natural calculating man and isn't the one who likes to improvise without making proper arrangements to plan out his actions beforehand. Behind that, he does have some moments of tenderness of sorts; that being understanding, a great listener, and empathetic. Though he restricts such traits a lot out of a backhand survival mentality.

Personality wise his fearless nature and strong, borderline aggressive attitudes keep him from faltering. Raiden has one inner fear of losing control of himself because of his anger issues.

One of his very few strengths is his observant nature and hyper attention to fine details. This has aided him before during his escape from GARNET where he spent years mentally recording details on guard movements, scientists, and structural flaws. Though it is not much of an immunity but an affinity, Raiden is not normally harmed by electricity. A specific vector will always manifest to absorb the electricity and store it in his inner electric core.

Raiden's combat style is a mix between true physical attacking and precise striking using his Vectors. His vector style is free flowing and natural, showing that his psychokinetic limbs are not only weapons but a true extension of his very existence and capable of harmonizing with various energies such as Mana, Eon, and Prana. Raiden's fluid movement allows him to keep distances between his targets at a manageable medium to allow his vectors a clear chance to tear and pierce through enemies and defenses. There are other factors that Raiden introduces in battle such as the use of Signaturgy, or the vast art of sealing and isolation magics. Part of his style besides fluid strikes is establishing an environment where he feels fully in control and imposes conditions that follow his terms. Those can range from environmental changes, mana density within a sealed off area, and using sealed areas to extend his vector range when needed. If given the chance, Raiden may also seal away powers to incapacitate enemies.

Unfortunately there is a weakness that he and his kind cannot take. High frequency vibrations. When introduced to it, Raiden is completely unable to use his vectors or concentrate. Without proper precautions, that can easily become a huge factor in incapacitating him almost every time.