Ustream (Drakine Iustriim, "Wild Cradle" or "Wilderness Placed in Protection") is a Sulsian territory on the planet of Euthora. It is south of Durasken and north of Nienearcl, on the western half of Forvolrasuls.

Ustream is notably almost uninhabited by humans in all time periods and timelines, aside from scattered settlements that exist at certain points in time. The most prominent of these by far is the Cult of Ustream in the associated canon of the Alter Timeline. Other settlements in this timeline include the Station of Seotara.

Smaller settlements may exist in Ustream depending on time and timeline, but overall the territory remains mostly uninhabited by humans in all timelines. However, the land is known to be guarded by dragons and it is said that Skykings remain here in hiding. 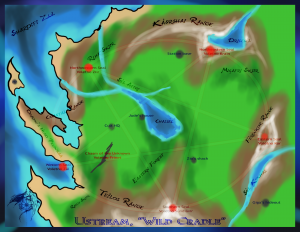 A map of Ustream in the Alter Timeline, showing the layout of the Seals of Ustream.

Ustream's topography is mostly flat, with grassland and forest dominating most of the territory. All borders aside from the west are blocked by mountains, while the western border is coastline, with a sharp drop into the deep waters of Shardifi Zul, or Mythril Sea.

Ustream contains three large mountain ranges, one of which it shares with Nienearcl. To the north is the Kásrshai Range, a name which roughly means Blade's Edge. This mountain range is tall, with the lake Drilesél (Frozen Lake) flowing from the top into the north. To the east is the Férenkor Range (Creation of the Sun), a somewhat smaller and shorter mountain range with Sél Kouhal (Spirit River) flowing north from Nienearcl into Arseyeln. Finally, to the south, is the large and towering Teílos Range (Wind), a sharply steep mountain range that lies on the border of Ustream and Nienearcl.

Ustream also contains one large forest (the Eastern Forest in the center) and three smaller ones- Railis Skiir (Darkwood Forest) in the southwest, the Rcha-Skiir (Arcane Forest or Mystic Forest) in the northwest, and finally Miçafri Skiir (Ashen Forest) in the north. Of these, the last is most notable, as it is a mostly-charred and burned woodland damaged by the small population of Ashstriders which live there.

The primary river and lake of Ustream lies in the center of the territory, the river Sél Atiri (Lightning River) flowing in from the coast of Shardifi Zul and feeding into the deep, calm lake of Chaisél, or The Lake That Channels Magic.

Geographically, Ustream is a key strategic point in the hostilities between Durasken and Seotara. If Durasken holds its position in Ustream, it has easy access to supplies from the north and trade from the south, as well as inhibiting Seotara's access to Shardifi Zul. If Seotara holds its position in Ustream, it inhibits trade between Durasken and Nienearcl as well as pressuring Durasken from the southern border. As such, abandoned buildings in various states of disrepair can be found in Ustream, the most prominent and well-maintained of which is the building which would be the Cult of Ustream Headquarters, centered in the grassland south of Sél Atiri and Chaisél.

In the Alter Timeline, another military outpost is created by Seotara, housing the Station of Seotara. This building is just south of the Kásrshai range, taking shelter behind the mountains to keep an eye on Durasken.

The Seals of Ustream are a collection of five landmarks most prominent in the Alter Timeline but present in all of them, though the landmarks do not house seals in the Prime or Drei Timelines.

In the north are two dilapidated Radiant Era castles, Voletno Krain and Voletno Ziir. To the east is Voletno Kor, notable for being the site of a massive shrine to Vol en-ait Cor, including a giant, twisting marble statue of him. To the west is Voletno Zul, a sunken shipwreck in the deep waters of Shardifi Zul. Lastly, to the south is Voletno Súndiávr, the Skyking Altar of Skyking Súndávr and Koth Grimseeker before they were sealed by Skyking Shyr.

All seals can act as Skyking Altars aside from Voletno Zul.

Ustream is temperate throughout most of the year, but becomes locked with snow north of the southern edge of the Eastern Forest and at high altitudes during the winter months. Winters are short and relatively warm aside from in the mountains.

Because the extent of the settlements in Ustream tend to be military outposts, their cultures reflect those of their parent countries.

In the case of the Cult of Ustream and its affiliated groups, as most of the members are from other worlds, cultures mix and these groupd do not have one single "culture" beyond a loose chain of command.