The Cult of Ustream Headquarters is an abandoned Seotaran military outpost in west-central Ustream, Forvolrasuls, Euthora.

Long after its abandonment in the Alter Timeline, it is found by Jason Shaver and taken up as shelter from the wilderness around it. Over the next few years, it attracts more individuals in need of shelter and eventually becomes the "home base" of the Cult of Ustream in the associated canon, for which it is named. The building's new residents tend to refer to the building by abbreviated terms, such as "HQ" or "Cult HQ". In Season Zero it was referred to as "the outpost" or similar terms, as the group itself has not been named at that point.

The Cult Headquarters is the primary setting of the Cult of Ustream canon, as its inhabitants do not frequently travel far from the general area.

In the Prime and Drei Timelines, the building remains abandoned.

The building is primarily made from stone bricks, with wood beams used for support. It is three stories tall excluding the basement, and is a very large building designed to accommodate many people. The windows that it has are large, and from an outside perspective appear to be scattered along the walls of the building. This is due to the layouts of the rooms not allowing for perfect symmetry. The entryway consists of a small, open "hall" that emerges several feet from the middle of the first floor, facing south.

(Note: view of building from outside and in front here)

The stone of the Headquarters is cracked and worn, showing the abuse it has taken over the years while it still stands, tall and imposing. While the new residents have had to patch up or completely repair the building on several occasions, the integrity of HQ is still solid and the building is known to be incredibly sturdy. The Headquarters has walls several feet solid, and can sustain heavy damage before crumbling.

The outer walls of the building are dotted with seemingly randomly-placed windows, which in reality simply match the layouts of whatever room they provide a view from. The building also has two slight overhangs, one between each floor, which are wide enough to walk on and are assumed to be there to provide a quick escape through a window if the building comes under attack from within.

The roof of the HQ has a stairwell leading down to the third floor and is rimmed by crenelations, which range from knee-height notches to merlons taller than an adult human. The crenelations provide cover when archers or mages are fending off attackers from the roof, as well as providing a sort of guardrail to prevent people from getting knocked off the building. The center of the roof has a large, circular glass skylight which provides a view directly through the third floor and onto the second. The skylight can provide a quick emergency entrance or exit, but was placed there specifically to funnel any hostile flying dragons to one point where they could be dealt with, as dragons would most likely attempt to break through the weaker glass rather than stone walls.

The inside of the building is decorated with black carpeting and the occasional black and blue banners hanging from the walls, ceiling, or support beams. These support beams are made of dark wood set in stone fixations and are usually vertical, but there are two horizontal support beams in the main hallway of the first floor, most likely placed for the purpose of aesthetics. Iron lanterns hang from the walls to provide light; the candles inside can burn for days at a time, but must still be replaced or extinguished from time to time. Aside from the candles, box-like lanterns are set in the walls themselves to provide light- these appear magical in nature, as they seem to respond to the light level of the building and will turn on when it begins growing dark.

Each floor has a large amount of open space, making it relatively easy for even a dragon to walk through the halls and rooms. Wide stairwells connect each floor, as well as the basement and roof. The second floor has a clear view of the sky, via a skylight in the center of the roof and empty space in the middle of the third floor. 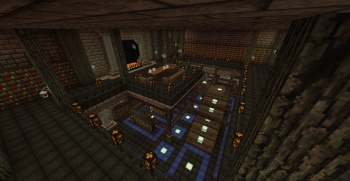 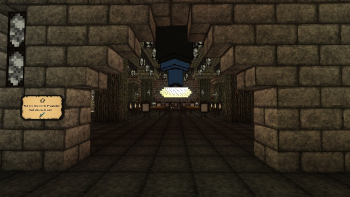 The re-purposed war room on the second floor. 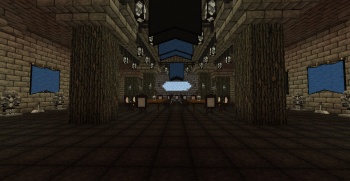 Inside the war room. 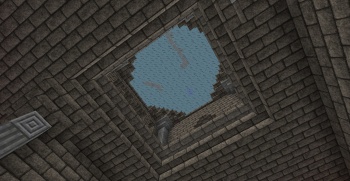 Second floor's view of the skylight.

The Cult of Ustream Headquarters is located in the wilderness of western-central Ustream, situated solidly in the grassland with the Eastern Forest and Railis Skiir close enough to allow hunting for food on a daily basis. It is relatively close to Ustream's coast and Dragon's Head Peninsula, and a large river and lake (Sél Atiri and Chaisél respectively) runs not far to the north.

Close to the south of HQ is a rift known as the Chasm of the Unknown, an anomalous chasm in the plains that only exists in the Alter Timeline due to the Seals of Ustream. The closest of these seals to HQ are Voletno Ziir, to the northwest, and Voletno Zul, to the southwest. They are roughly equidistant to HQ, although Voletno Zul is slightly closer.

At Voletno Ziir is an old, worn castle dating back to Ustream's limited Radiant Era settlements. At Voletno Zul is a seaside cavern which reaches many miles below the surface, and even breaches the ocean to exit near an old, rotting shipwreck.

Dotting the area near HQ are multiple building structures, most of which are only present in the Alter Timeline, due to the influence of the Cult of Ustream. These include the coliseum to the northeast (the only one to exist in the other timelines), and the residences of Ziolang, Judas Numidius, and Pricilla. Prior to his defection at the end of Season One, Lord X-Giga-X also resided in his laboratory near Cult HQ with his faction, Organization G-X. However, this laboratory was subsequently ordered to be destroyed after his defection.

Further to the northeast is the Station of Seotara base, and slightly further on is Voletno Krain and another old castle of the Radiant Era, this one having been claimed by Drake Kuro during Season Zero. With Voletno Súndiávir and its associated Skyking Altar a distance to the southeast, this makes Voletno Kor the furthest seal and Skyking Altar from HQ, hours away by flight to the east and on the other side of Ustream.

In all timelines, the building was built as a Seotaran military outpost during the Radiant Era as a strategic point to keep watch over both Durasken and Skyking Súndávr's Altar, as the outpost was built just barely within Súndávr's claimed protectorate. The Seotarans remained in the building after Súndávr was defeated, eventually leaving during the Dissonant Era shortly after the start of the Fyreborne War, while Durasken was too occupied fending off Corian Fyreborne to bother expanding into Ustream.

The outpost is inhabited by the Cult of Ustream later during the Dissonant Era of the Alter Timeline, several members of which may live elsewhere despite having a room in the building.

The outpost remains abandoned in the Prime and Drei Timelines.