Karthoum (pronounced /kɑɹ.taʊ.ˈum/ [kar-tau-oom]) is the largest and most populated planet in the Tulsar Star System. It is considered the capital of the Karthinian Empire and the Tulsa Star System. It has no known moons and orbits around the singular star, Tulsa. Karthoum's geography is heavily split across its tilted equator, between a temperate northwestern half and a volcanic southeastern half.

Karthoum's world capital is the Imperial Citadel, which lies as an independent district in the city of Minestra. Karthoum is, for the most part, united under the singular banner of the Karthian Empire, though it is the Karthian Collective that administrates most of the planet. There is one main country, Kartha, which oversees its several planetary districts, as well as the many tribal nations that like to be independent of the empire.

Karthoum is divided between northwestern and southeastern regions according to its tilted equator, which is actually based off of Karthoum's magnetic axis.

The northern half is a mainly flat, temperate continent with wild weather conditions, such as "star-snow", corrosive rain, and "Tulsa's Wrath", a planet-wide hurricane that occurs every two Karthinian years. This area is where most of Karthoum's population lives, and where most Karthite history was forged. It has now become mainly urbanized, with easy protection and protocols for the more damaging weather attacks. 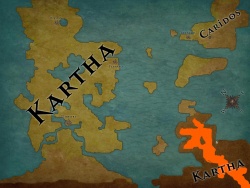 Thrace is the largest landmass in the northern hemisphere and the second-largest in the world. Thrace is mainly composed of the country of Kartha, as well as one or two smaller tribal nations. Thrace is largely urban and almost completely civilized, with only Imperial reserves to serve as the only place for natural wildlife.

Torval (demonym ???) is the largest landmass on Karthoum. It is situated predominantly in the southeastern quadrant, and is composed mainly of volcanoes and industrial centers. Kartha owns all of Torval, and is where most of Karthoum's industrial centers can be found.

Ju is a cluster of islands towards the north pole, and consists of all of the tribal nations of Karthoum.

Wigsam is a detached landmass of Torval and is almost entirely uninhabited, save for a small tribal settlement called Ash Terminal. The land is mainly used for radioactive and superweapon testing.

Kartha is by far the largest, most populous, and most powerful sovereign nation on Karthoum. It claims all of Torval and the main landmass of Thrace, accounting for more than 70% of all of Karthoum's land. It is controlled by the Karthinian Empire, and governed by the Karthian Collective. To properly rule over the large landmass, Kartha is broken up into 50 districts, including two self-administrating sovereign districts, and assigns a specific purpose for each district.

The capital of Kartha is Minestra, while its most populous city is Pennance. Other notable cities of Kartha include Elysium, Great Gilead, and Cassian City. The world capital of Karthoum is the Imperial Citadel, which can also be found within the walls of Minestra.

On Karthoum, there lies around 20 to 30 smaller tribal nations that inhabit some of the scattered Islands of Thrace, all of Ju, and have even inhabited Wigsam, in the form of Ash Terminal. All are very small, and even though they all express their independence, they are all kept under the Empire's thumb, kept under close watch and control with imperial military.

The currently most notable tribal nations of Karthoum are as follows.

The tallest mountain is a volcano by the name of Ash Mountain, and is located in Wigsam.

The lowest elevation point is at the bottom of the Great Lake, located in the middle of Thrace.

Due to technological innovations and massive urbanization, monster presence on Khartoum is minimal, and kept to a few well-controlled environmental reservations on Thrace.

Most people who live in Kartha are free to express whatever religion they like, to legal extent. However, as there is no funding for religion at all, most Karthian citizens (being Fumerians) simply practice a form of monotheistic agnosticism that was one of Fumerian history (simply called Fumerism). There is, however, a branch of Fumerism, called Tsumerism, that also tends to be favored among the Karthite people. Tsumerists believe that their sole deity is actually their sun, Tulsa, and that it should be praised daily for the miracles it brings to its people.

There is a small sect of thought-to-be-crazy historians, turned into a powerful and dangerous cult, that also roam around on Karthoum, called the Cult of Dakology, or CoD. The Cult of Dakology believes in Dr. Dakka, an ancient supercomputer that is located in a space station that seems to have been around longer than the Fumerian race has. They believe that Dr. Dakka is a deity that exists to spread his wrath all over the galaxy, and by following him, he will grant them unfathomable power and immortality, to which he actually has, according to the Karthinians.[unclear]

Karthoum is considered to be in the space age. While some nations are very much behind in technology, Kartha is very well off both technologically and magically, as there are many schools of different types of magic, and even two entire districts dedicated to the art. Because of the government's focus on both scientific and magical research, magitech is seen very commonly in Kartha. For example, it was magic that made quantum levitation possible for ships of any size and stature to be sent into space.

The Karthian Collective is the current government of Kartha that was formed some 250 years before Standard Canon Time. It is a utilitarian monarchy that is ruled by one of three emperors, and governed by three different houses: the House of Ministries, the House of Districts, and the Imperial House.

The House of Ministries rules over the civil rights of Kartha's citizens, and controls what is considered socially moral and immoral for Karthians. This house specifically is divided into further "ministries" that specialize in specific civil aspects. Some ministries include the Ministry of Kinship, the Ministry of Justice, and the Ministry of Love.

The House of Districts rules over each of Kartha's districts more separately and in detail, and they are responsible of making sure each district is doing its respective job.

The Karthinian Empire is the largest governing body in the Tulsa star system. It was founded 150 years before SCT when the First Triumvirate, the Empire's first three emperors, rose into power in the Karthian Collective, and peacefully overthrew the old government. In its place the Karthinian Empire formed, which kept the Collective to run over Kartha as a part of a greater, system-wide society.

The Empire rules over most of the entire star system with Karthoum as its capital, and is in possession of five planets, two of which are considered habitable, and an ancient space station hailed as an artifact. The empire controls all space travel and space military in this system, and eventually have plans to expand outward into other systems, in order to spread their sense of order and unity to other civilizations.

The Empire rules by a triumvirate system with utilitarian morals and prides itself constantly on the aspects of unity and order. Progress is to be consistently made and met within the Empire, within an ethical pace, and it expects all of its people to be respectful, productive, and loyal towards their superiors and elders.

The Empire rules this triumvirate system with three emperors at the head. There is a military emperor tasked with the handling of the Empire's massive military. There is also a diplomatic emperor to serve as an ambassador from the empire, who is in charge of propaganda, foreign affairs, and promoting the sense of unity and order (which is what the empire stands for). Finally, there is an administrative emperor ruling over Karthoum independently, as well as acting as an administrator of the Empire. This emperor is considered to be the most powerful and revered of the three, and as such is expected to be kept to very high standards. All major positions of power within the Karthinian Empire are given to the Fumerians, with very few exceptions given to other race that show exemplary prowess in their skill of trade.