From Manaverse Wiki
(Redirected from Vindrite)
Jump to: navigation, search

Vindrgard is a pseudo-Jovian planet in the Manaverse. It is defined by floating, city-sized crystals, a thick atmosphere with a toxic mist at sea level, advanced technology, and a cataclysm that forces society to rebuild itself every millennium. The planet is far from its sun, but the thick atmosphere mitigates the cold that would come from this fact, trapping heat and causing a perpetual temperate climate in all but the towering mountains. Storms are extremely common, though acidic precipitation can be a serious hazard after the beginning of a new cycle.

Vindrgard has one large moon and four smaller ones; prior to the Fourth Era, the planet had two moons, but the smaller of the two was shattered by the Nidhoggr of the Third Era and split into four. The largest of these moons is known as Nibiru; the other four are, in descending order of size: Nyfleim, Niovellir, Vanireim, and Haljeim. Vanireim and Haljeim have both been pulled into Nibiru's orbit. Prior to being shattered, the smaller companion to Nibiru was known as Asgaerir. 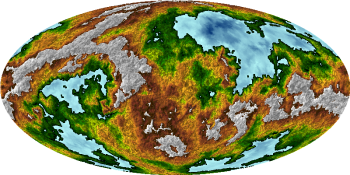 Most of Vindrgard's surface is land; the entire planet is only about 15% water (the rest of the water from the frequent storms either evaporates, becomes snow, or becomes fog and mist). As such, most of the landmass is connected, with a few scattered islands in the shallow oceans. Continents are thus separated by mountain ranges or similar defining landmarks rather than by oceans. Most of Vindrgard's surface is damp but rocky and barren; its atmosphere is slightly over twice as thick as a planet of its size should have. A heavy mist lingers at sea level; this mist contains chemicals that could easily prove fatal to humans but which the Atchi'taii absorb for nourishment. Vast crystals known as the Crystal Network float over Casabaia and Zanitrica, on which human society lives separate from Atchi'taii, due to the toxic mist on the surface.

The Crystal Network is a group of crystals that float through a combination of Mana flow and electromagnetism; the former grants the crystals themselves pseudosentience, while the latter allows communication between crystals via AeroComm. The crystals typically range from clear blue to bright red in color, with pinks and lavenders being common mediums. They tend to be dipyramidal in shape and structure, with long, sharp, narrow spars sprouting out in varying directions. The base dipyramid of the crystal can be considered the "heart" of the city, while smaller settlements on the spars "guard" the main city, in a sense. Both humans and Crystal Striders tend to chip away at the ends of these spars, whether it be to create jewelry, to feed the Striders, or even out of boredom; this prevents the crystal from growing so large as to fall out of its "course" levitating above the surface.

The Crystal Network is known as the Bridge of Asgard to the Atchi'taii and Bifrost to Vindrite Dragons.

On the rare occasion that Vindrgard's sky is clear and all five moons are full, the moonlight shines on the crystals, which then refract it. The crystals act as prisms, and the moonlight reflects from crystal to crystal in a nighttime rainbow. From a distance, the multicolored streaks appear to be a glowing bridge connecting the crystals from planet's surface to the sky. This phenomenon is often called the Rainbow Bridge and is believed by the Atchi'taii to be the path that Vindrite dragons use to cross between Vindrgard and the realm of the gods.

The Arch Range is a mountain range of towering height, its peaks locked in snow year-round despite the planet's generally temperate climate and slight water shortage. Blizzards rock the area frequently; not even the Atchi'taii reside here. Instead, scarce dragons have been reported, as well as a species of great wolf-like beasts called the Ulfric. One of the crystals of the Crystal Network often passes over the southern cluster of peaks on its usual path, and another tends to glance the western end of the range.

Also known as Saaldyr's Gate or the Gate of Souls, the Dragon's Gate is a rumored, possibly mythological structure supposedly situated on one of the towering peaks of the Arch Range. It is believed that the Nidhoggr of each Era enters Vindrgard through this gate, and that its spirit leaves through the gate after finishing the destruction it was sent to cause.

According to theories, the Dragon's Gate is a large structure made from the same crystal that forms Vindrite dragons, and was in fact the origin and "spawn" point of the first Vindrite dragons.

Most of Vindrgard's humans speak exclusively Common, though those that frequent the AeroComm have developed a sort of "slang" used almost only in the AeroComm. Additionally, the Atchi'taii on the planet's surface have their own language, Taiin, although many speak Common through rare encounters with humans.

Every millennium, Vindrgard undergoes a violent cycle of destruction, change, and renewal. This is instigated by the era's Nidhoggr, a force of nature and eternal law that manifests itself as a mortal dragon. The dragon, near the end of its assigned era, begins to destroy human civilization before going to a superweapon, using its own soul as fuel. This results in the complete destruction of civilization and the Nidhoggr's death.

Rather than the dragon's soul going to the Spirit World, [INSERT GOD OF DECAY] (masquerading as the leader of a pack of Ulfrics) collects it and delivers it to Saaldyr, who safekeeps it until the soul has regained its strength and the world is safe enough to allow the Nidhoggr to be reincarnated as a dragon hatchling. As some humans do survive the cataclysm, this cycle of death and rebirth has caused an inherent fear of dragons to take root in Vindrite society, despite most wanting nothing to do with humans.

The Vindrite pantheon created this cycle in order to attempt to create a perfect human civilization- barring luck, only the most resourceful or resilient humans survive the end of a cycle, thus passing on these favorable traits to their offspring. Over the cycles, society itself has evolved so that each renewal is quicker and easier than the last one.

The Vindrite calendar is separated into eras of approximately 1000 years each, although a single cycle can vary from 950 to 1025 depending on circumstances with the era's Nidhoggr. A year is 400 days long, separated into ten months of 40 days each. The dating system notes the day, month, era, and year in that order- for example, the fifth day of the month of Saali in the 620th year of the Third Era would be written as "5th of Saali, 3E620".

The months are as follows: 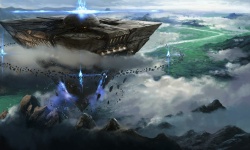