Deathstorm (proper Drakine name Diávenfriit, Common Storm of Death) is one of the Shadow Drakes that inhabit Ustream, Euthora. He was previously jointly bonded to both Jason Shaver and Lord X-Giga-X before being released of the latter dracoimperist's control and becoming the former's Familiar. He is a member of the Cult of Ustream, a former member of Organization G-X, and a former guardian of one of the seals in Ustream. He is the father of the young hatchling Zephyrus.

He exists only within the Alter Timeline as a result of his species existing solely within this timeline. 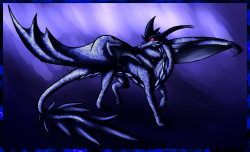 Deathstorm is about 34 feet in length with a wingspan of 46 feet, with midnight blue scales covering most of his body. His head is decorated by a pair of smooth, midnight blue horns and a large, bony crest colored a slightly darker shade of blue. He has red, slit- pupilled eyes. Underneath this pair of eyes are a pair of smaler red, narrow "eye spots". While they do not affect his overall vision, they appear to be as expressive as his actual pair of eyes, reshaping themselves in tune with them. The wings of the Shadow Drake are tipped black. A line of small spikes runs down his spine. A bony fan similar to the crest on his head resides on the tip of the tail.

Deathstorm is slightly bigger in his Advanced Formation, although he remains quadrupedal. His scales are a slightly darker shade of blue than in his base form. Along his neck are eighteen additional eye spots, all a darker shade of red than his eyes. Most of his body is covered by a thick, black crystalline structure that acts as armor for the Shadow Drake, even having appearances similar to pieces of human armor. A single spike juts out from the tip of his tail, shaped like the blade of a scythe.

Deathstorm is a relatively calm and relaxed dragon. Because of his bond with Jason, he has found himself more social than the other Shadow Drakes in Ustream. While normally not aggressive, he's known to show some aggression when people close to him have been put in danger, especially Jason, Flameheart, and Zephyrus. As a guardian of one of the seals of Ustream and Ustream as a whole, he is willing to do whatever he can to protect the seals and those living in Ustream.