Grodisflare (proper Drakine name Krotismiara, Common Roar of Ruling Flame) is an Armored Wyvern-Hydra hybrid born on Euthora. He was formerly the Familiar of a dracoimperist named Z, and after his ties with this man was severed, he was sent to Terra via unknown means. He is the Familiar of the achlymperist Lord X-Giga-X. He is a high-ranking member in Organization G-X, and was one of the original six members involved in the formation of the group.

In the Prime Timeline, Grodisflare continues his adventures with Lord X-Giga-X and the second iteration of Organization G-X during several plots of Infinitum Rokans. He eventually travels to Euthora, where he encounters his former master.

In the Alter Timeline, he was sent from Terra to Ustream, Euthora following the events of Organization G-X as the result of improbable interference during an attempted teleportation. He was a member of the Cult of Ustream and the second iteration of Organization G-X formed as a faction within the group before Lord X-Giga-X's eventual defection. 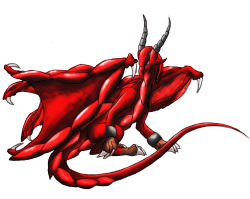 The crimson-scaled Grodisflare is about 42 feet long and about 14 feet tall. Despite being of a wyvern species, he actually has four feet as result of his hydra blood. He has purple eyes. His head is covered by a thick layer of Mythril plates slightly darker in color, which form a helmet-like structure on his head. His back and large wings are also covered by similar plates, acting like a layer of armor against attacks. He wears large, rock-like bracelets around his fore ankles. His feet are colored a brownish-black and have a worn-out appearance, giving the appearance that he is wearing boots. A large, black Z is present on his back, placed by his former master, known by the same letter.

In his Advanced Formation, Grodisflare continues to stand on four feet and is considerably longer, now 55 feet in length. Thick, silver-colored plates cover most of his body, providing a new layer of protection for the Armored Wyvern. A more notable feature of his form is that Grodisflare has four additional heads, showing off his hydra blood. From right to left:

Much of Grodisflare's backstory is unknown as a result of him having forgotten it. What is known is that he was born on Euthora, and the familiar of a dracoimperist identified Z, their bond was somehow severed for reasons unknown, and Grodisflare somehow found his way to Terra.