Mimring Thunderscale (proper Common name Radiant Scales of Lightning (direct translation Radiance Lightning-Scale; root meaning Glowing Aura of Electric Armor); proper Drakine name Memiring Atirifámi) is an adolescent (at SCT) Plated-Stormcloud Firedrake hybrid and the brother of Starlight and Icelake Thunderscale, and the son of Irisidion. He is also the Familiar of the Shapeshifter Jason Shaver. Mimring is Fire-Aligned due to species.

In the Prime Timeline, Mimring is involved in the Euthoran Song canon. He and Starlight are the two main characters of Fyreborne. He later becomes his master's proxy after Jason ascends to godhood.

In the Alter Timeline, Mimring is involved in the Cult of Ustream canon. Mimring serves as an adviser and a sort of unofficial Second-in-Command to Jason, though he is never formally given the title.

At about 35 (at standard canon time; in later parts of Euthoran Song he may be far larger) feet long and over six feet tall (at his shoulder) with a wingspan almost twice his entire length, Mimring has brilliantly metallic golden copper scales with darker copper plates along his neck, back, tail, wings, and limbs (the plates on his spine and wing fingers carry dark reddish bands across the middle). Two swept-back ivory horns decorate his crested head, which sports a beak-like snout. Just below his horns are two colorful lime-green fans with bright red splotches, which flare open as a warning when Mimring is angry. His eyes are sharp and almost the exact same shade of green as Jason's, and his underbelly and wing membranes are a light golden bronze. His front legs are armed with a long, vaguely lightning-shaped blade at the joints, and three ivory talons with an additional dewclaw. His back legs are very similar, but sport no blade.

Along his back grow ten darker copper plates, which end just before the first of the two rings on his tail, the tip of which is armed with a wicked, though chipped, blade. This blade is silver-black and very light, though sturdy and difficult to break. On his wing arms are five short plates each- two before the elbow and three after. His four wing fingers also carry longer plates (about the length of those on his back); four on the leading edges, and three on each of the two remaining fingers. His front legs have three short plates (two before the elbow and one after) whereas his hind legs have five (two before each joint and one on the digitigrade foot). The plates pointing to his joints are duller at their tips, to avoid stabbing himself by accident. Mimring's claws are semi-retractable and the dewclaw on his forelegs is opposable.

Mimring has two very small chin spikes made from bone, and his nostril ridges are spiked. On either side of his swept-back crest, spiked eye ridges protrude slightly from his head, shielding his eyes from both the sun and attacks from above. The spikes on these ridges have dark tips similar to the bands on his plates, while the ridges themselves and the bridge of his snout is the same coppery color as the actual plates. The plates on his underbelly are leathery and slightly flexible, as are the rings on his tail. Mimring's tail-tip is forked due to a slight genetic mutation in the egg; the non-bladed fork is undecorated, flexible, and fully functional, though seems to contain partially undeveloped nerves, as it can be slashed at with little pain. On his left shoulder are three long, jagged scars colored a pale bronze; this is also his skin color, so his hide and the inside of his mouth are this color as well.

As of the beginning of Season 2 of Cult of Ustream canon, Mimring is missing his left wing due to an injury suffered from an assault by Lord X-Giga-X. This carries over into all forms.

Advanced Form (Cult of Ustream only) 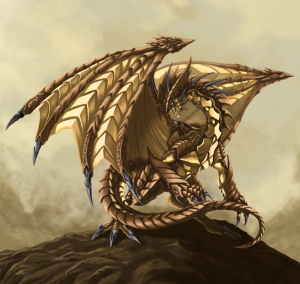 Mimring's Advanced form is slightly bigger, stands on two legs, and is almost fully covered with golden-copper plates. He has four horns in this form, plus the blade on his tale is about twice the size and positioned like a switchblade rather than a razor. This blade is not often seen as it can fold into the scales on the tail to prevent it from dulling. His claws are almost crystalline and his fire, while having the same effects, is much more vibrant. Mimring's head is also slightly blunter, and his eyes are somewhat overshadowed by the thick plate that protects his head, but they are still a brilliant, glowing green that can be seen easily in dim lighting. 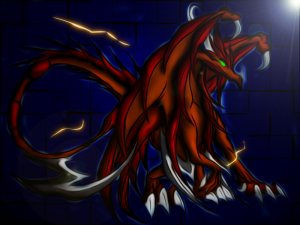 Demon Form (Cult of Ustream only)

Mimring's Demon form, given to him by Ziolang transferring a strange energy to the dragon as he was dying, is a sleek, fast, aggressive creature with only enough self-control to avoid attacking his master. In this form, he is much darker in color- dark copper with a red tinge- and his plates are longer and sharper. His wing membranes, plates, crest, and tail rings are bright red, as is a new spade on the tip of his tail. His tail is still bladed, but this blade is now a huge, jagged edge shaped vaguely like lightning. Mimring keeps his quadrupedal gait and loses the plates on his limbs (aside from his wings) entirely.

Advanced-Demon Form (Cult of Ustream only)

Dubbed "Rising Storm", Mimring's Burst Mode is sleek, sharp, and blazingly fast in the air. He strongly resembles his Stormcloud Firedrake heritage, adopting the lean frame and aggressive bearing of the ancestors on the paternal side of the family, Alethios and Skyking Súndávr. This form is bipedal and covered in sharp plates, those of which existing in his normal form keeping their size while his normal scales are replaced by razor-edged, shingle-like armor. Mimring's Burst Mode seems to have an actively electric aura; while it is safe to approach him (if the one approaching is an ally), the air around him crackles with dormant energy and carries a noticeable scent of ozone. Spiked rings cover up most of his tail, which ends in a three-spiked covering tipped with a hooked spike that resembles two double axeheads aligned perpendicularly. The tail's covering, as well as two similar coverings on his forelegs, are bright red, rimmed with gold, and resemble gauntlets. They appear to be made of the same leathery hide that forms his scutes in less-armored forms.

Mimring's eyes in this form are sharp and glow a brilliant apple green, drowning out his narrow pupils and casting a faint but noticeable green glow on the metallic scales and crown-points around his eyes. His scales, plates, and twelve-point crown are a brilliant, brassy gold and highly reflective; if polished, one could use a discarded scale as a brass mirror. Their bright appearance is only heightened by the frequent crackling of electricity, which casts light that reflects off of the scales and gives Mimring the appearance of actively glowing.

Burst-Demon Mode (Cult of Ustream only)

In general, Mimring is calm and cool-headed, neutral to those that have neither earned his trust nor his enmity. He does not trust easily, and even individuals he has known for a long while may be regarded with neutrality, or at worst, suspicion. Mimring is careful by nature and constantly vigilant, analyzing the situation around him in order to best deal with it. The dragon mildly dislikes direct conflict, but will engage in it without hesitation if he feels that he must.

Mimring can be described, especially by his enemies, as aggressive and controlling. Proud as any dragon, he is fiercely defensive of his territory and will frequently drive away intruders if he feels that they pose even the slightest threat to his own status quo. Particularly aggressive around other dragons, Mimring can be incredibly high-strung around other members of his species and is ferocious and vengeful to his enemies. Mimring has a spiteful and vindictive side, and holds a grudge for potentially years.

On the other hand, to those who have earned Mimring's friendship, the dragon is caring and loyal. In both the Prime and Alter Timelines, Mimring acts as a guardian and voice of reason to Jason Shaver, having essentially raised him in the Alter Timeline. Other dragons connected with Jason are also subject to Mimring's softer and more friendly side. By instinct, Mimring is highly protective of those he cares about, and will put his life on the line to defend them. On the rare occasions where he and Jason fundamentally disagree, Mimring will place his full trust in Jason's judgement, and would gladly follow Jason to the ends of the earth even if his master is following a path the dragon does not agree with.

His default flame is the red-orange-yellow his species normally breathes; it takes a sapphire-colored tint to instead become a frigid torrent of ice. White heals surface wounds it touches and green wears down, and eventually breaks, barriers and blockades. Yellow restores energy to the target, usually Mana but may very rarely adapt to other energies (this may be used to inflict damage to an enemy's Malice Pool, though the opportunity for this application is exceedingly rare). Gold and silver flames are obtained later, after his electroimpery; the former revives the dead (but cannot restore lost limbs or revive a decapitated corpse; occasionally, even if he revives a corpse, it may be too damaged to survive anyway) and the latter removes illness and toxins from the body. He may rarely breathe black fire, which burns hotter than any other Euthoran dragon's flame, and results in Mimring momentarily losing control of himself.

In Cult of Ustream canon, Mimring gains a dark, bloodred flame tied to his Demon forms. This flame burns hotter than his normal fire and is generally more destructive, seeming to be a sort of medium between his default and black flames. It can be used in all forms, but can be considered the "default" fire for his Demon forms.

Mimring has an aggressive, fierce fighting style that can easily switch between ranged and close quarters, though he prefers to keep his distance. At a distance, he uses his Spectrum Firebreath and electroimpery; when closer to his enemy, he will resort to claws, teeth, and the blades on his tail and forelegs. Conversely, he makes a very good support due to his healing fire, and even a "tank" of sorts due to his armored plates. Other than attacking, Mimring relies primarily on speed and agility in battle, especially in aerial combat.

Mimring is historically on neutral or even poor terms with his family.

Mimring is typically neutral towards the other Cultists. However, he is friendly with Stormshaper and Deathstorm, and loves Jason as one would love close family. He distrusts Kyton Haryn, but tolerates his presence.

Mimring is generally neutral to the Station of Seotara as well, however he finds Hobekitsu Gecar to be an annoyance and distrusts Slash due to the Phantasian Shapeshifter's first encounter with Jason.